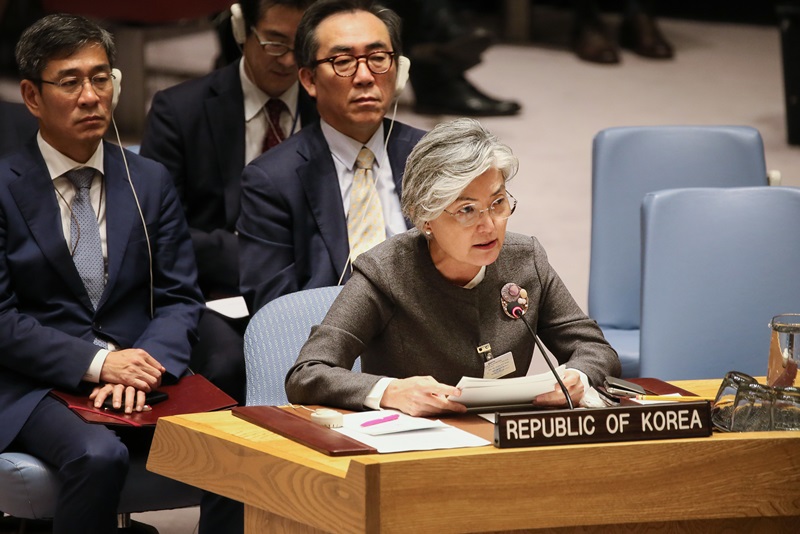 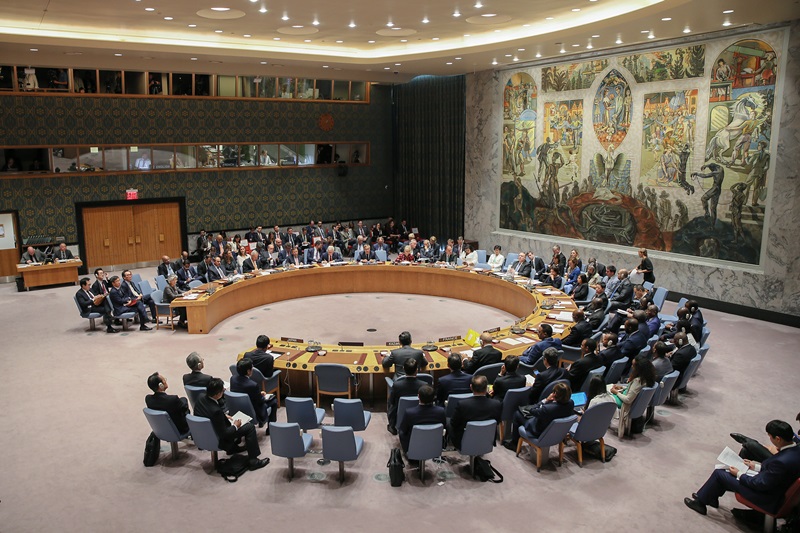 Thank you very much for convening this meeting and the opportunity for me to speak to the Council.

As you stated, Mr. President, we are indeed at the dawn of a new day with regard to the challenge of North Korea’s denuclearization. And it is useful to take a step back and to realize just how new.

Barely a year ago, here in the Council we were counting the numbers of North Korea’s nuclear tests and ballistic missile launches and calling for united action to bring North Korea to the right side of history.

But here we are, and we have a different set of numbers to ponder – three Inter-Korean Summits and the first ever US-North Korea Summit in a matter of five months, with more likely to follow in the months to come.

Allow me to quickly cap the milestone developments on the Korean Peninsula that have brought us to this point.

They started with North Korea’s participation in the 2018 PyeongChang Winter Olympic Games and Paralympic Games in February and March, to which the North Korean leader sent a high-level delegation. This was quickly followed by the visit of President Moon’s special envoy to Pyeongyang in early March, who came back with a first-hand confirmation of Chairman Kim’s intentions on denuclearization.

On 27 April, the two Koreas held an Inter-Korean Summit – the first in more than a decade. In the outcome, the Panmunjeom Declaration, the two sides agreed to actively cooperate for the establishment of a permanent and stable peace regime on the Korean Peninsula, and confirmed the common goal of realizing a nuclear-free Korean Peninsula through complete denuclearization.

At the first-ever US-North Korea Summit on 12 June, the top leaders of the two countries also confirmed the common goal of building a lasting and stable peace regime on the Korean Peninsula, and the North Korean leader reaffirmed his commitment to complete denuclearization.

Last week, President Moon visited Pyeongyang for his 3rd summit meeting with Chairman Kim. They discussed at length the denuclearization challenge, including concrete ways to bring it about. And for the first time in his own voice, the North Korean leader stated his commitment to turn the Korean Peninsula into a land of peace free of nuclear weapons and threat, and this at a joint press conference with President Moon, which was broadcast live to the rest of the world.

More specifically, in the Pyeongyang Joint Declaration, North Korea announced that it will permanently dismantle its Dongchang-ri missile engine test site and launch platform under the observation of experts from relevant countries, and indicated its willingness to take additional measures, such as the permanent dismantlement of the nuclear facilities at Yongbyon, as the United States takes corresponding measures.

The international community has been able to bring North Korea back to the dialogue through a well-measured combination of diplomatic tools. In particular, the Security Council played a critical role.

The Council unanimously adopted a series of sanctions in response to North Korea’s nuclear and missile provocations, and the international community acted with unity in fully implementing them, sending a clear message to North Korea that its pursuit of nuclear weapons program will never be accepted. At the same time, the door for dialogue was kept open to bring North Korea back to the negotiating table.

Eventually, the will of the international community has prevailed, and North Korea changed course and came to the path of dialogue and peaceful resolution. In the last few months, it has taken a series of “for the first-time” actions that were unthinkable only a year ago.

As for the government of the Republic of Korea, we are committed to continuing to work with the international community to ensure that the Council’s sanctions are faithfully implemented, even as we continue to engage North Korea to facilitate substantial progress towards complete denuclearization.

We are also furthering inter-Korean dialogue to solidify the momentum for reconciliation and better relations. This includes implementing the comprehensive military agreement signed in Pyeongyang, which aims to eliminate the threat of war and prevent accidental clashes.

Last week, while in North Korea, many of us joined President Moon and Chairman Kim on their visit to Mount Baekdu. As the highest point on the Korean Peninsula, this mountain bears a very special meaning for all Koreans. The microclimate of Mount Baekdu makes the weather very unpredictable – sunny and clear one moment but foggy and drizzly the next. We were there in stunningly clear and sunny weather. But that was probably the exception than the norm.

Our path to the complete denuclearization and the establishment of a permanent peace on the Korean Peninsula might prove likewise –uneasy periods of uncertainty and weariness interspersed by moments of a step change in progress and clear visibility toward our goal.

But in the longer scheme of things, comparing where we were a year ago and where we are today, the situation has definitively become more clear and visibility has been greatly enhanced. The change has been possible because of bold, far-sighted and determined leadership, much of which has rested on you Mr. Pompeo, and the unity of the international community.

As long as we stay this course, I am confident that the weeks and months ahead will take us even closer to our shared goal of a realizing a nuclear-free Korean Peninsula that is permanently at peace.