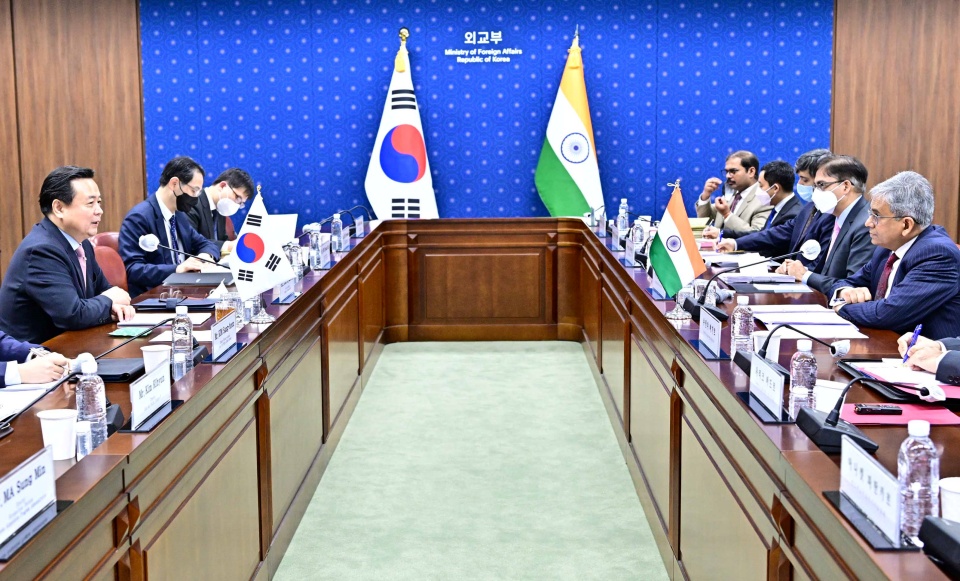 1. Vice Minister of Foreign Affairs Cho Hyundong hosted the 5th Korea-India Foreign Policy and Security Dialogue with Secretary (East) of the Ministry of External Affairs of the Republic of India Saurabh Kumar on January 16.

2. The 5th FPSD is the first high-level meeting between Korea and India this year, which marks the 50th anniversary of the bilateral diplomatic ties. At the dialogue, both sides agreed to work together to develop the “Special Strategic Partnership” through robust high-level exchanges this year.

ㅇ Vice Minister Cho noted that since the establishment of diplomatic ties in 1973, both countries have witnessed continuous development of multi-faceted bilateral partnership in various areas, including political, economic and cultural domains. On the occasion of the golden jubilee this year, he proposed further strengthening bilateral cooperation in various areas, including defense and the defense industry; economic and development cooperation; people-to-people and cultural exchanges; science and technology; global cooperation, etc.

- In addition, Vice Minister Cho congratulated India’s assuming of the G20 presidency. He also explained the main elements of Korea’s “Strategy for a Free, Peaceful and Prosperous Indo-Pacific Region” and expressed Korea’s will to deepen strategic communication and cooperation with India, a leading regional partner with shared values.

ㅇ Secretary Kumar mentioned that he was pleased with his first visit to Korea on the occasion of the 50th anniversary of the bilateral ties and emphasized that India attaches great importance to cooperation with Korea, which shares values such as democracy.

- In particular, Secretary Kumar stated he hopes to further strengthen future-oriented bilateral cooperation in the areas of science, cutting-edge technologies and infrastructure. He also mentioned that as Korea recently announced its Indo-Pacific Strategy, India looks forward to deepening cooperation in the related areas.

- In addition, Secretary Kumar asked for Korea’s support for India’s G20 Presidency, as the country is making efforts to contribute to dealing with global challenges.

3. The two sides agreed that an unprecedented number of ballistic missile launches by North Korea in recent times pose a serious threat not only to the Korean Peninsula, but also to the region and the entire international community. They also concurred with the importance of a firm and united response of the international community to such threats.

4. In addition, regarding the plane crash in Nepal on January 15th, the two sides stated that both Korean and Indian governments are endeavoring to ensure a swift assessment of the situation and provide support to the family members of victims, and they expressed heart-felt sympathies for the victims’ families in both nations.

5. The 5th FPSD today served as a good occasion to increase momentum for strengthening of bilateral cooperation on the occasion of the 50th anniversary of diplomatic ties this year, by providing a venue for taking stock of overall bilateral issues, and exploring ways to enhance substantive cooperation, as well as discussing major regional and global issues.