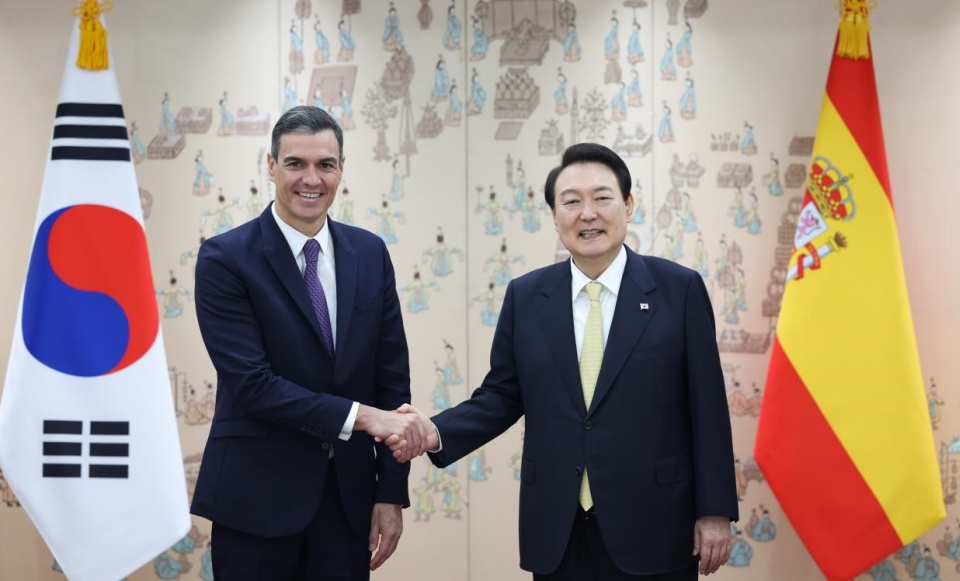 At a joint news conference after the summit, President Yoon said, "I sincerely welcome Prime Minister Sanchez's official visit to Korea and am delighted to host our first bilateral summit in Seoul," adding, "Both sides held in-depth discussions on reinforcing the bilateral 'strategic partnership.'"

The two leaders met earlier in September at the United Nations General Assembly in New York and the Group of 20 summit this week in Bali, Indonesia.

On what measures will boost the strategic partnership, the president said, "We welcome the recent expansion of mutual investment cooperation between both sides in future strategic industries such as electric vehicle batteries and renewable energy like solar and wind power. We also agreed to continue necessary support at the government level."

The two leaders agreed to continue needed support to expand human exchange in sectors like tourism and cultural cooperation and said the opening in Seoul next year of the Spanish cultural center Instituto Cervantes and a Spanish tourism office will contribute to raising mutual understanding and friendship between the people of both nations.

Prime Minister Sanchez said, "Over the past few years, bilateral relations have drastically gotten stronger," adding, "A number of high-level visits were made and opportunities arose for the people of both countries to diplomatically approach each other."

Both leaders started their day with a private chat before engaging in bilateral talks, followed by a joint news conference and official luncheon.

On the afternoon of the day before, President Yoon held a bilateral summit with Dutch Prime Minister Mark Rutte on strengthening cooperation in a comprehensive range of sectors including politics, national security and economy.

The presidential office said the two sides agreed to upgrade bilateral relations to the level of a "strategic partnership." They also pledged to raise cooperation in semiconductors, set up communication channels for the construction of a nuclear power plant in the Netherlands, and bolster collaboration in high-tech areas like smart agriculture and the space industry.

During his talks with reporters during his commute to work, President Yoon on Nov. 18 said, "Because the most important thing is for both countries to have complementary structures in semiconductors, the basic content of the summit is building stronger cooperation and securing the active support of the Korean and Dutch governments for the complementary chip sector."