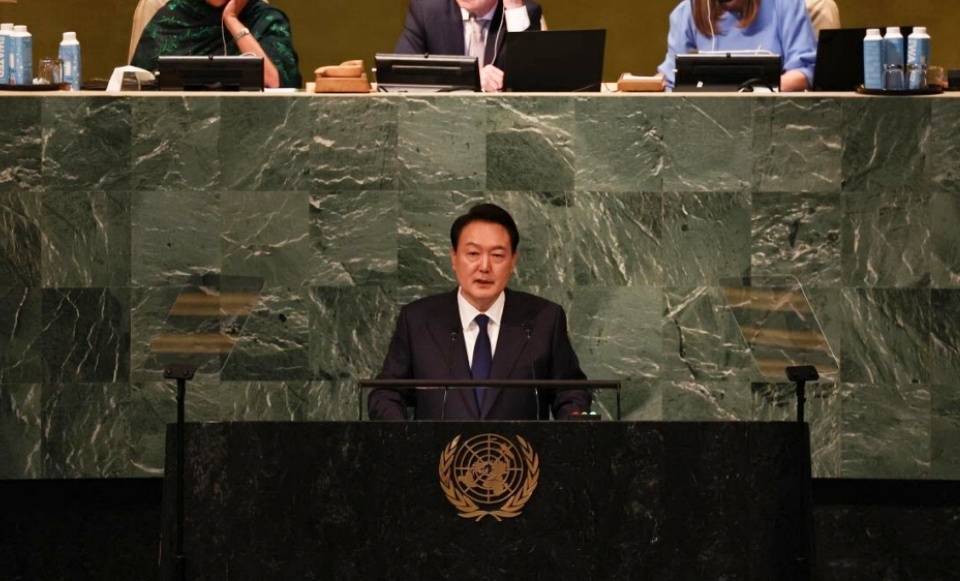 I offer my sincere congratulations to His Excellency Mr. Csaba Kőrösi for assuming the presidency of the United Nations General Assembly.

I hope that the 77th session of the UNGA, under your leadership, will bring together the wisdom of each member state so as to shape a better world.

for his tireless devotion as he embarks on his second term.

Under the United Nations Charter, we are called upon to endeavor to promote social progress and better standards of life in larger freedom and to unite our strength to maintain international peace and security.

Our modern history testifies to the process of our solidarity and unity in safeguarding freedom and pushing our civilization forward.

Today, the global community is yet again witnessing freedom and peace of its citizens put in jeopardy. Attempts to alter the status quo by force endangers the lives of innocent people; nuclear weapons and other weapons of mass destruction pose increasing threats to humanity; systemic violations of human rights leave millions of children deprived of their future.

Such threats to freedom and peace must be overcome through solidarity and fearless commitment to the framework of universal global norms consolidated over the years within the UN system.

The theme of the UNGA session this year, the “watershed moment”, encapsulates the gravity of the global crisis confronting us, which underscores the solemn role of the UN.

The first step in our journey to seek solution that will help us through these turbulent times to find answers begins with solidarity and deference to the universally accepted global norms, working together throughout the UN system which has been established over the past decades.

As humanity strives to defend freedom and build lasting peace, the UN’s role is indispensable.

Genuine freedom is not just being free from the shackles but having opportunities to live life to the fullest with dignity. Genuine peace is not an absence of war but removing conflict and enmity that hold back shared progress of humanity and building the foundation for greater prosperity.

Genuine freedom and peace can turn into reality when we are free from disease and hunger, free from illiteracy and free from want of energy and culture.

In this regard, the United Nations has been exerting great endeavors through the UNECOSOC and UNESCO, among others, yet is now urged to take on a broader role and responsibility.

To tackle the challenges brought on by the pandemic, the UN must play a central role in bringing the community of nations together to decisively step up their support for countries with limited fiscal space and technical expertise.

In pursuit of the global agenda for decarbonization, countries with leading green technologies must work to unsparingly share new and renewable energy technologies with others.

In the era of digital sophistication, one of the most urgent tasks for the global community and the UN is promoting global cooperation to narrow the digital divide which exacerbates polarization between nations.

Countries at the forefront of digital innovation must offer broader assistance for digital education, technology transfer and investment while the UN must redouble its efforts to mobilize support to that end.

The Republic of Korea, notwithstanding the recent fiscal consolidation, scaled up support for those who are in need with resources secured through expenditure restructuring. At home, we are offering more assistance to socially vulnerable groups. Abroad, we increased our Official Development Assistance budget with a vision to achieve a more inclusive development globally.

Just as broadening support for the socially disadvantaged groups lays the groundwork for sustainable prosperity, support for nations of the world facing challenges will render global freedom and peace more sustainable.

As a responsible member of the international community, Korea is committed to playing its due responsibility and role for the freedom of global citizens and prosperity of the global community.

Korea has accelerated research and development for Covid-19 therapeutics and vaccines, pledging 300 million dollars toward the ACT-A Initiative and 30 million dollars to the Financial Intermediary Fund of the World Bank, among others, thereby expanding its contributions to building a more robust global health architecture.

To ensure a more effective response to future infectious disease outbreaks, Korea will host a ministerial meeting of the Global Health Security Agenda (GHSA) in Seoul this November. We are also taking part in negotiations to reach a pandemic accord under the World Health Organization.

In addition, Korea will remarkably increase its contribution to the Global Fund, joining forces with our partners in our fight against infectious diseases including AIDS, tuberculosis and malaria.

Turning to the issue of climate change, Korea will scale up its green ODA, help developing countries transition to a low-carbon future and share its innovative green technologies with the entire humanity.

Over the years, Korea has been transferring and sharing its e-government digital technology with developing countries and many others.

The Republic of Korea is pushing forward with its plan to transform the government into a digital platform government. It is an ambitious initiative to remarkably upgrade our democracy, public service, and welfare through digital technology.

We will continue to more widely share our advanced digital technology and data, and spare no effort in providing support and in investing in education.

As we seek answers to the global crisis we are faced with, the viability of the UN system and the universal global norms architecture is under test.

The crisis confronting us will only be resolved when we stand firmly in solidarity to share the universal value of freedom and work together to uphold and spread our freedom.

In this vein, we must more firmly support the system of the UN anchored in a spirit of freedom and solidarity as well as the normative frameworks that have thus been universally recognized in the international community.

Any attempt to turn away from the UN system and universal norms will divide the global community into blocs, further compounding the crisis and turmoil.

We must more rigorously identify the nature and the roots of the problems that lie before us. The international community must vigorously endeavor to share responsibility and join whenever necessary forces to resolve the challenges we face.

Once again, I call upon global citizens and leaders of the world for their resolute and enduring support for the UN system and universal global norms as we seek answers in this watershed moment.

The very first mission of the United Nations after its founding was to approve the Republic of Korea as the sole legitimate government on the Korean Peninsula, and to defend the freedom of my country by sending over UN forces during the Korean War.

Thanks to such efforts by the United Nations, Korea was able to become what it is today. As such, the Republic of Korea will protect and expand the freedom of global citizens; and together with the United Nations, we will fulfill our responsibilities to promote peace and prosperity around the world.