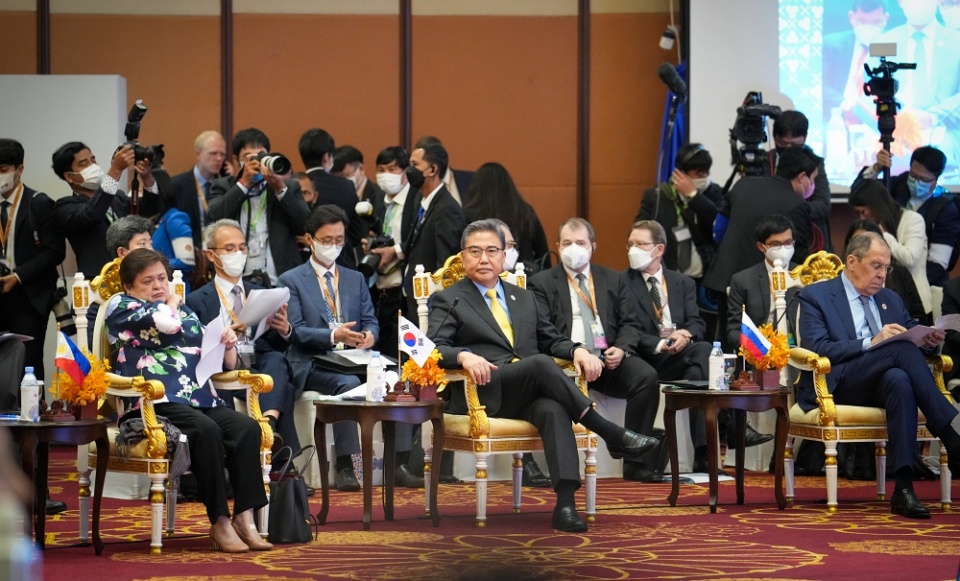 ﻿1. Minister of Foreign Affairs Park Jin attended the 29th ASEAN Regional Forum (ARF) Foreign Ministers’ Meeting, which took place in Phnom Penh, Cambodia on Friday, August 5 from 14:00 to 18:00, and discussed with other participants major security issues in the region, such as those concerning the Korean Peninsula, the Taiwan Strait, the South China Sea, Ukraine, and Myanmar.

2. About Korean Peninsula issues, Foreign Minister Park pointed out that North Korea launched 31 ballistic missiles, including six ICBMs, just this year and that this was a clear violation of multiple UN Security Council resolutions.

о Foreign Minister Park also pointed out nuclear development will only undermine North Korea’s security, induce further isolation, and aggravate the suffering of its people. He urged North Korea to return to the path of dialogue and diplomacy, instead of provocation and confrontation.

о Furthermore, Foreign Minister Park reaffirmed the ROK government’s willingness to present an audacious plan to drastically improve North Korea’s economy and the lives of its people if North Korea embarks on a substantive denuclearization process.

о Additionally, Foreign Minister Park expressed concern about the humanitarian and human rights situation in North Korea. He also hoped that North Korea does not ignore the earnest concerns of the international community.

3. With regard to the recent crisis in the Taiwan Strait, many participants expressed concern and actively expressed their positions on how to resolve the situation.

o Foreign Minister Park expressed serious concern about the rising tension in the Taiwan Strait, which is one of the busiest sea lanes in the region.

o While expressing his support for the one-China policy, Foreign Minister Park talked about how peace and stability in the Taiwan Strait is essential for the security and prosperity of this region and how important it is to Korea.

- Foreign Minister Park raised concern that the geopolitical conflicts in the region can lead to major political and economic instabilities, including supply chain disruptions, and have negative repercussions on the peace and security of the Korean Peninsula.

- In this context, Foreign Minister Park took note of the "ASEAN Foreign Ministers’ Statement on the Cross Strait Development" announced on August 3, in which the foreign ministers expressed their concern about the escalated tension in the Taiwan Strait.

4. Participants also actively expressed their opinions on the major security issues in the South China Sea, Ukraine, and Myanmar.

o Regarding South China Sea issues, many participants emphasized the importance of upholding international law, including the 1982 UNCLOS, and the freedom of navigation and overflight in securing peace and stability in the region.

- In addition to the freedom of navigation and overflight, Foreign Minister Park also stressed the importance of communication and coordination among maritime law enforcement agencies in deescalating the tension and improving the security of the sea lanes. He hoped that all parties would work together to strengthen such communication.

o Regarding the situation in Ukraine, Foreign Minister Park reiterated what he had said at previous meetings that the use of force, especially against the lives of innocent civilians, cannot be justified under any circumstances.

- Furthermore, participants expressed their concerns about the global food and energy security crisis caused by the war in Ukraine and hoped that the situation would be resolved as soon as possible.

o On the Myanmar situation, Foreign Minister Park pointed out that violence in Myanmar, including the recent execution of pro-democracy and opposition activists, is also posing a huge challenge to the region’s democracy and human rights and condemned such reprehensible acts.

- Furthermore, Foreign Minister Park appreciated the efforts made under the ASEAN Chair, Cambodia, to make progress on the ASEAN Five-Point Consensus. He also urged the military regime in Myanmar to immediately end violence, release all those wrongfully detained, and embark on constructive dialogue.

о Foreign Minister Park mentioned that, just as it did this year, the ROK would continue to serve as co-chair of the ARF Inter-Sessional Meeting on ICT security in 2023 so as to contribute to strengthening regional ICT security.

6. This year’s ARF Foreign Ministers Meeting is considered to have provided an opportunity for participants to exchange in-depth views on various regional issues. The ROK government will continue to strengthen its contribution to the ARF and regional peace and security.