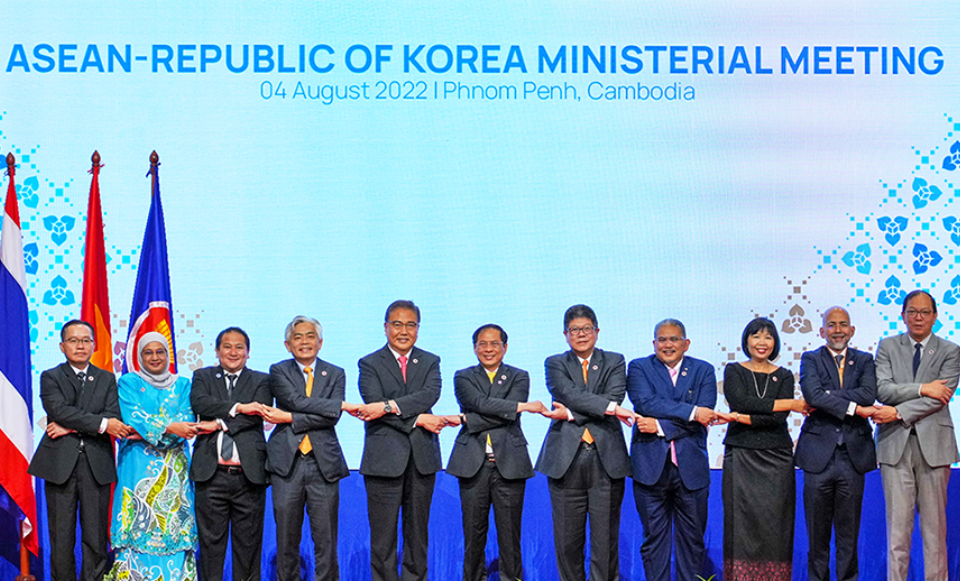 о The participants, under this year’s ASEAN-related meetings’ theme of “Addressing Challenges Together,” discussed ways to facilitate a post-pandemic economic recovery and enhance health cooperation. They also exchanged views on regional and international matters such as the North Korean nuclear issue and the situation in Myanmar.

2. Foreign Minister Park welcomed that the ASEAN+3, launched in the wake of the Asian financial crisis of 1997, has successfully established itself as one of the most developed mechanisms for functional cooperation in the region.

о Recalling that the ASEAN+3 has successfully addressed the COVID-19 crisis, he proposed continued partnership in responding to emerging challenges, such as supply chain disruptions, inflation, and food and energy crises, through the newly adopted ASEAN+3 Cooperation Work Plan (2023-2027).

* The ASEAN+3 has expanded cooperation to cover more than 20 areas including health, finance, economy, and food security, running more than 60 meeting platforms, and implementing more than 100 initiatives a year.

* The ASEAN+3 Work Plan is a five-year plan for cooperation in areas such as political and security, economic, and social and cultural fields.

4. Regarding regional health cooperation, Foreign Minister Park explained the ROK’s contribution to the COVID-19 ASEAN Response Fund and an additional $300 million pledge to the ACT-A*. He emphasized that the ROK will play a leading role in responding to future pandemics including by supporting regional vaccine production capacity.

* The Access to COVID-19 Tools Accelerator (ACT-A) is a form of global collaboration launched in April 2020 to accelerate the development and production of, as well as equitable access to, COVID-19 tests, treatments, and vaccines.

о In this regard, he shared the results of the first ASEAN-ROK Health Ministers’ Meeting held on May 15 and the training program offered by the ROK as the WHO Global Biomanufacturing Workforce Training Hub, as well as plans to hold a Vaccine Cooperation Forum, GHSA Ministerial Meeting and World Bio Summit, all in the second half of this year.

5. Regarding concerted efforts for an economic recovery, the participants took note of the entry into force of the Regional Comprehensive Economic Partnership (RCEP)* this year and looked forward to the RCEP’s contribution to supply chain resilience and the boosting of trade and investment.

о In this regard, Foreign Minister Park explained that the ROK, through its active participation in the Indo-Pacific Economic Framework (IPEF)** launched this year, will play a role for the IPEF to contribute to sustainable development in the region, together with other economic partnerships.

о He also stated that the ROK hopes to contribute to regional financial development through the ASEAN-ROK Financial Cooperation Centre launched this April, and expressed the wish to expand regional cooperation to facilitate the transition toward a digital and green economy and overcome food and energy crises.

* RCEP: The 10 ASEAN countries, the ROK, China, Japan, Australia, and New Zealand (a total of 15 members)

6. Regarding the situation on the Korean Peninsula, Foreign Minister Park stated that the ROK government, while taking a firm stance against the DPRK's provocations, will keep the door to dialogue open and remain flexible and open-minded in its diplomacy toward the DPRK. He also asked for support and cooperation on the ROK government’s policies.

7. Foreign Minister Park strongly condemned the recent executions of democracy activists by the Myanmar military regime, saying that the move undermines on-going efforts for meaningful progress on the implementation of the Five-Point Consensus (5PC).

о He also explained that the ROK government plans to provide an additional 5.6 million USD in humanitarian assistance for people of Myanmar and Rohingya this year.

8. The ROK government will continue to play a leading role in the post-COVID-19 recovery efforts through ASEAN+3 cooperation, and thereby work towards realizing the vision of becoming a global pivotal state which contributes to freedom, peace and prosperity in the region.