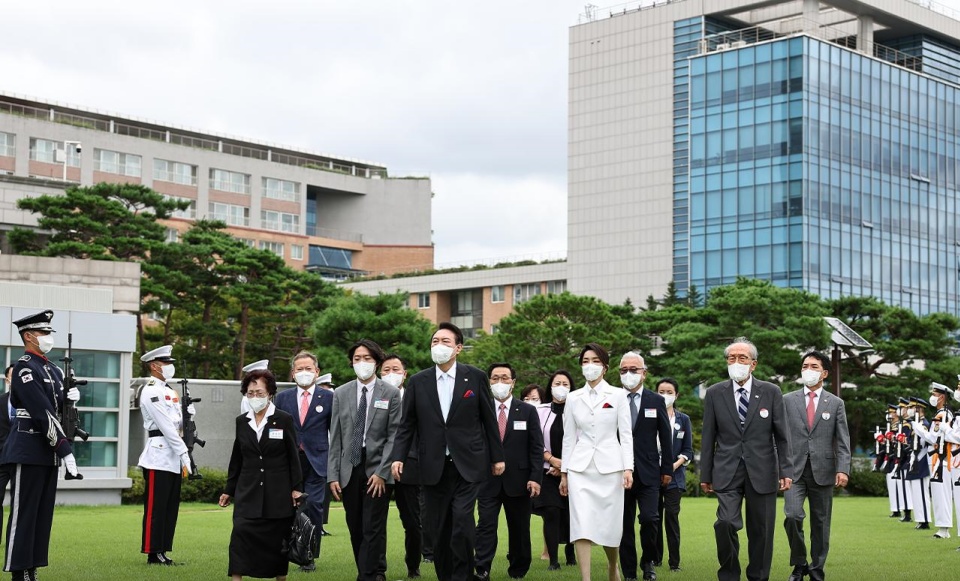 I express my deepest gratitude and respect to our fallen forebears and patriots who sacrificed themselves for our independence. I also wish to convey my utmost respect to their families as well.

As inscribed in the March 1st Declaration of Independence, the charter of the Provisional Government of the Republic of Korea in Shanghai and Yun Bong-gil’s spirit of independence, the independence movement during Japanese colonial rule yearned for a democratic republic where the people are the rightful owners of their nation and where freedom, human rights and the rule of law reign supreme.

The independence movement did not end that day but continues to carry on even to this day. We fought to build a free and independent nation in the face of communist aggression; we accomplished economic growth and industrialization which became the cornerstone of freedom and democracy; we advanced our democratic ideals based on these accomplishments. As such, our independence movement still continues.

In the past, it was the yearning of weaker nations to reclaim their sovereignty and freedom which was forcefully taken from them by those stronger nations wielding force.

Now, the mandate of the times calls for countries that share universal values to stand in solidarity to defend freedom and human rights and achieve peace and prosperity for the citizens of the world.

The independence movement for freedom has also led us to attain economic development and the establishment of institutional democracy which are the foundation that allows for genuine freedom to flourish. Our independence movement must now contribute towards protecting and expanding the freedom of all global citizens who share such universal values.

As we celebrate the 77th Liberation Day, we must remind ourselves of the historic significance of this independence movement that encompasses the past and points towards the future.

Our independence movement is a dynamic process. At every historic juncture, the movement has evolved along with the new mandate of the times, taking on new meanings.

It is about restoring, defending and promoting freedom as well as fighting new threats to freedom, all in full solidarity with, and working alongside, global citizens with the goal of achieving global peace and prosperity.

Looking back at our history, we encounter a myriad of great independence activists: those who made the ultimate sacrifice fighting against Japanese imperialists and those who exercised noblesse oblige by helping arm and train independence fighters. I am always overcome with gratitude whenever I think about the courage and sacrifice made by these heroes.

There are other independence activists whom we should never forget: those who cultivated not only the nation’s spirit but also its abilities to build a liberal democracy by focusing on educational and cultural programs at home and abroad; those who fought the Communist invasion in defense of our freedom and democracy; leaders and laborers alike who toiled to lay the economic foundation that enabled genuine freedom to take root; and let us not forget that those who sacrificed and dedicated themselves for institutional democracy are also our independence leaders.

We must remember all of those who devoted themselves to building today’s free and democratic Republic of Korea as great independence activists.

Honoring and respecting them is our duty and responsibility but it is also the beginning of and a foundation upon which to ensure our future prosperity.

In the past, we had to unshackle ourselves from the political control imposed upon us by imperial Japan so that we could regain and defend our freedom. Today, Japan is our partner as we face common threats that challenge the freedom of global citizens.

When Korea-Japan relations move towards a common future and when the mission of our times align, based on our shared universal values, it will also help us solve the historical problems that exist between our two countries.

The governments and peoples of both countries, based on mutual respect, must contribute to the peace and prosperity of the international community through extensive cooperation in various areas, ranging from economic and security cooperation to social and cultural exchanges.

Freedom – the spirit of our independence movement – builds peace, and peace defends freedom.

Peace on the Korean Peninsula and in Northeast Asia is an important prerequisite for global peace and serves as the foundation for protecting and expanding our freedom and that of global citizens.

Denuclearization of North Korea is essential for sustainable peace on the Korean Peninsula, in Northeast Asia and around the world.

The audacious initiative that I envision will significantly improve North Korea’s economy and its people’s livelihoods in stages if the North ceases the development of its nuclear program and embarks on a genuine and substantive process for denuclearization.

We will implement a large-scale food program; provide assistance for power generation, transmission and distribution infrastructure; and carry out projects to modernize ports and airports for international trade. We will also help enhance North Korea’s agricultural productivity, offer assistance to modernize hospitals and medical infrastructure, and implement international investment and financial support initiatives.

Amid growing uncertainty in the global economy, the Government must attain fiscal soundness in order to maintain the credibility of the Korean economy.

To this end, the government will reduce unnecessary spending and make structural reforms in the public sector

At the same time, we will provide more intensive support for low-income families and the socially disadvantaged with the fiscal resources derived from the restructuring of expenditures.

Guaranteeing a strong economic and cultural foundation for low-income families and the socially disadvantaged is the essence of universal values of freedom and solidarity.

Basic-living security benefits will be strengthened to stabilize the livelihoods of those in need. More government support will be provided to those who experience unforeseen challenges in their personal lives.

Caregiving services for people with disabilities will be greatly enhanced in order to minimize the inconveniences experienced in their daily lives. More attention will be given to young individuals preparing to stand on their own after aging out of institutional care.

In order to relieve concerns regarding housing, the government will stabilize the housing market by streamlining regulations that distort demand and supply. Better housing services will be offered to the socially disadvantaged.

The recent flood caused much damage and suffering to our people.

When disaster strikes, low-income families and the socially disadvantaged are exposed to greater risks. The government will offer thorough and deliberate assistance to these people.

In order to help those who suffered from the flood quickly return to their daily lives, the government will spare no effort to provide support and restore damages. Fundamental measures will be taken to prevent future disasters.

We will alleviate the financial burden of small business owners who face difficulties due to COVID19 and also due to natural disasters such as the recent flood.

Deepening polarization and social divide are urgent challenges that we must overcome.

In order to overcome this challenge, we must make great strides and take the big leap forward to innovate our economy.

Such leap is possible through innovation, and innovation can take place when we have freedom.

Regulations will be streamlined so that the private sector can forge ahead.

Regulatory reform will encourage and allow Korean companies to invest and create jobs within the country instead of relocating overseas.

Scientific and technological innovations will lead to more rapid growth.

The Government will make sure that we can become a leader in industrial advancement and technological development rather than simply being a follower.

The fusion of cutting-edge science and technology can also help discover solutions to the crises of climate change, pandemics and other disasters that threaten the sustainability of humankind.

When all of us had to endure dark times; when none of us knew what to expect; when no one believed we had a future, we nevertheless forged ahead believing in the fundamental universal values of freedom, human rights and the rule of law and achieved phenomenal growth and prosperity that all of us enjoy today.

We were able to regain our freedom through our people’s great determination and courage. We have become stronger in the process of defending and expanding this freedom.

Our independence movement is still ongoing. It is part of an endless journey for freedom that will continue.

The Republic of Korea’s constitutional order that brought us freedom and prosperity stands firmly upon the triumphant spirit of independence of those who dedicated themselves for our independence during the terribly dark times of Japanese colonization.

By contributing to global peace and prosperity in solidarity as a responsible nation on the foundation of the universal values of freedom, human rights, the rule of law, we will be able to inherit and preserve the noble cause of our heroes who dedicated themselves to the independence movement.

Together with our great people, I will undoubtedly help achieve the historic global mission that has been entrusted to us.