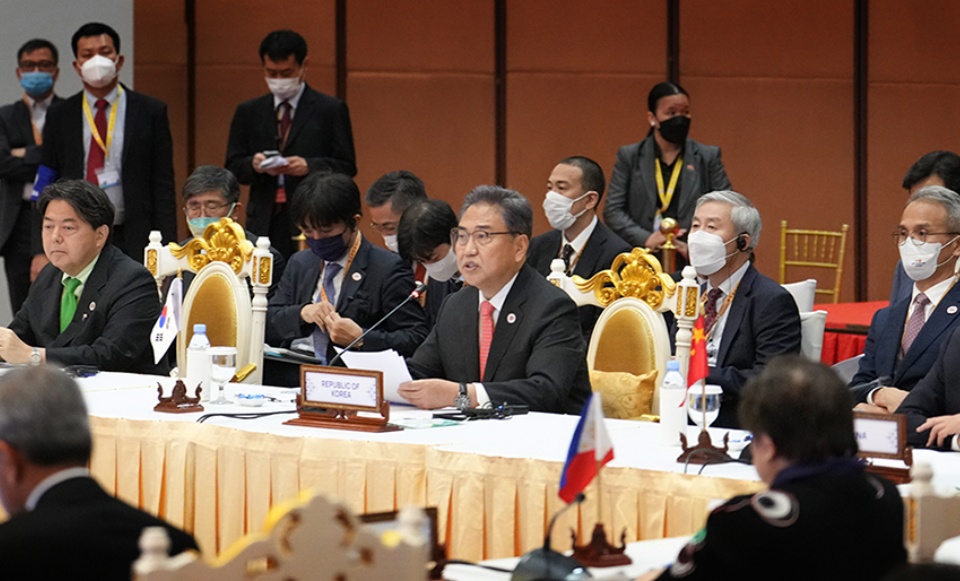 1. Minister of Foreign Affairs Park Jin attended, as Co-chair*, the 25th ASEAN-ROK Foreign Ministers’ Meeting, held in Phnom Penh, Cambodia, on August 4. In the Meeting, Foreign Minister Park presented the ROK government's initiative to foster greater solidarity with ASEAN. The participants exchanged views on regional and global issues, including the situation on the Korean Peninsula.

※ The ASEAN-ROK Foreign Ministers’ Meeting, attended by the ROK and the 10 ASEAN member states, has been held every year since 1997.

* As the country coordinator for the ASEAN-ROK dialogue relations, H.E. Bui Thanh Son, Minister of Foreign Affairs of the Socialist Republic of Viet Nam, presided over the meeting as Co-chair.

2. Foreign Minister Park shared the ROK government's vision of serving as a global pivotal state which actively contributes to freedom, peace and prosperity in the Indo-Pacific region and beyond. In this regard, he explained that the ROK government will foster greater solidarity with ASEAN, the ROK’s key partner in the Indo-Pacific region, through substantial, strategic and future-oriented cooperation.

о The ASEAN side expressed its satisfaction on meaningful advances in the ASEAN-ROK ties in a whole range of fields and welcomed the new ROK government’s commitment to further broaden and deepen ASEAN-ROK relationship.

3. The two sides shared the view that enhanced strategic dialogue is needed between the ROK and ASEAN in pursuit of regional peace and stability in the region, amidst the rapid changes in the strategic environment in the Indo-Pacific.

о In particular, Foreign Minister Park emphasized that the ROK would strengthen cooperation in fields in which ASEAN has a need for collaboration, such as cyber security and maritime security, and expand cooperation projects for capability-building of ASEAN in these fields.

4. The two sides agreed to bolster the foundation for boosting trade and investment through multi-layered cooperation mechanisms, such as the ASEAN-Korea Free Trade Agreement (AKFTA) and the Regional Comprehensive Economic Partnership (RCEP), in order to better respond to growing uncertainties in the global economy due to COVID-19 and Russia’s armed invasion against Ukraine, among others.

о Foreign Minister Park emphasized the need to further enhance joint endeavors for economic security such as strengthening supply chain resilience. He looked forward to working closely with participating ASEAN countries in developing the Indo-Pacific Economic Framework (IPEF) into a meaningful platform that substantially drives economic growth in the region.

5. Foreign Minister Park also expressed hope to boost common efforts in order to effectively respond to challenges that directly affect the daily lives of people in the region, such as infectious diseases, climate change, and natural disasters.

о The two sides noted that valuable groundwork was laid for expanding joint initiatives in the health sector through the “1st ASEAN-ROK Health Ministers Meeting” held in May. The ASEAN side expressed their hope that the ROK, as the “WHO Global Biomanufacturing Workforce Training Hub*,” would contribute to the enhancement of vaccine and pharmaceutical production capacity in the region.

* The WHO designated the ROK as a hub country that provides education and training on vaccine and pharmaceutical production processes to increase the vaccine production capacity of low- and middle-income countries (February 2022).

- This year, a total of 510 trainees including 370 global trainees will participate.

о Foreign Minister Park explained that the “Partnership for Methane Action*” with ASEAN is being pursued to support ASEAN's response to climate change. He also expressed his hope that the 1st ASEAN-ROK Ministerial Meeting on Disaster Management, which is scheduled to be held this October, will contribute to enhancing disaster response capacity in the region.

* This is being pursued as a new flagship project under the ASEAN-Korea Cooperation Fund to support ASEAN's transition to carbon neutrality and a green economy.

- It will lay the foundation for concerted efforts for methane mitigation between ASEAN and the ROK through joint training, technology exchange, and pilot projects.

6. The participants also exchanged views on major regional and international issues, such as the North Korean nuclear issue, and the situation in Myanmar and Ukraine, as well as the South China Sea issue.

о Foreign Minister Park shared the ROK’s assessments of the situation on the Korean Peninsula, including the DPRK's launch of ballistic missiles on an unprecedented scale this year. He stated that the ROK government, while taking a firm stance against the DPRK's provocations, will keep the door to dialogue open and stay flexible and open-minded in its dialogue with the DPRK. In addition, Foreign Minister Park emphasized that the ROK government will take a balanced and holistic approach to deter the DPRK's nuclear threat, dissuade its nuclear development, and pursue complete denuclearization through diplomacy. He asked for support and cooperation from ASEAN countries on the ROK government's policies.

о Foreign Minister Park condemned the deteriorating situation in Myanmar, including the recent executions of democracy activists by the Myanmar military regime. He also explained that the ROK government is engaging in continued efforts to play a part in resolving the situation in Myanmar, such as providing an additional 5.6 million USD in humanitarian assistance for the people of Myanmar this year.

о With regard to the situation in Ukraine and the South China Sea, Foreign Minister Park placed an emphasis on the importance of resolving issues peacefully in accordance with international law and norms.

7. The two sides agreed to continue to work closely together for the success of the upcoming ASEAN-related Summits scheduled for November 2022, based on the results of the discussions at this Ministerial Meeting.