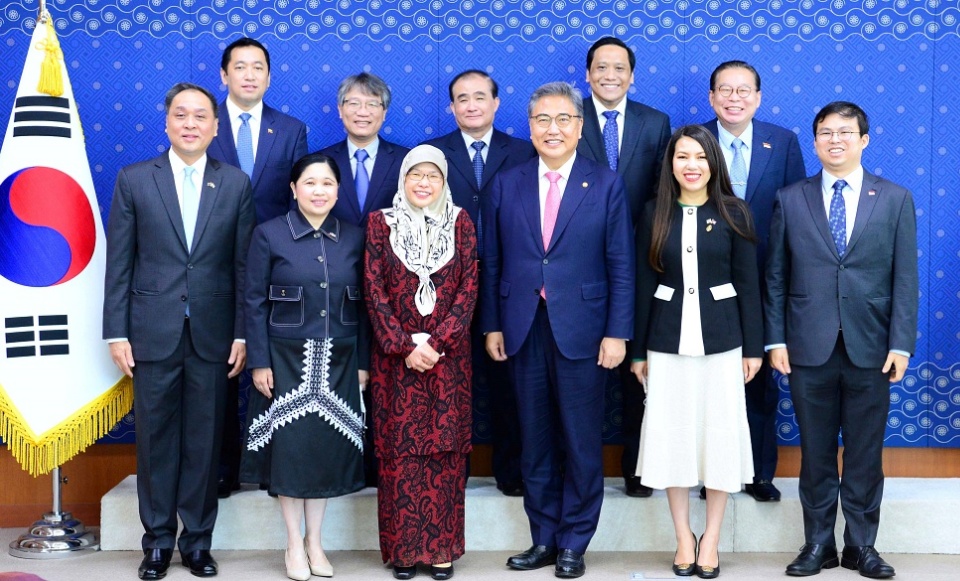 ﻿1. Minister of Foreign Affairs Park Jin met with the Ambassadors of the ASEAN Committee in Seoul (ACS) on May 27, 2022. At the meeting, the Foreign Minister reaffirmed the ROK government’s commitment to enhance its relations with ASEAN and exchanged views on ways to further strengthen ASEAN-ROK partnership.

＊ ACS : Committee of Ambassadors of the 10 ASEAN Member States (AMSs) to the ROK

2. Foreign Minister Park pointed out that the meeting with the ACS, which was his first official event with the diplomatic corps since his taking office, showed the level of importance the ROK placed on ASEAN. As such, he went on to emphasize that the ROK government will both deepen and broaden its relations with ASEAN in all areas including political and economic security affairs.

о The Foreign Minister also mentioned that in view of the fast-changing global economic environment, cooperation in economic security affairs between the ROK and ASEAN needed to be strengthened. Moreover, taking note of many AMSs’ participation in the Indo-Pacific Economic Framework (IPEF), the Foreign Minister also looked forward to close cooperation with these countries with regard to the IPEF.

о The Foreign Minister also took the occasion to request support of the AMSs regarding the ROK’s bid to host the World Expo 2030 in Busan.

3. The Ambassadors of the ACS recognized that remarkable achievements were made in ASEAN-ROK relations during the past five years under the New Southern Policy, and appreciated that the ROK government continued to place a priority on its cooperation with ASEAN. In this connection, the Ambassadors expressed hope that both ASEAN-ROK partnership and the ROK’s bilateral cooperation with their respective countries will be further strengthened in a future-oriented way in areas where the ROK can share its best practices and expertise including human resources development, public health, culture, digital transformation, climate change, de-carbonization, and energy transition, among others.

о The Ambassadors also looked forward to the ROK’s strong support and cooperation for the success of the ASEAN-related Summits, the G20 Summit and the APEC Summit slated to be held later this year in Southeast Asia.

4. Building on the Foreign Minister’s meeting with the ACS, the Ministry of Foreign Affairs will continue to communicate with ASEAN to explore ways to further strengthen the substantive and mutually beneficial ASEAN-ROK partnership.