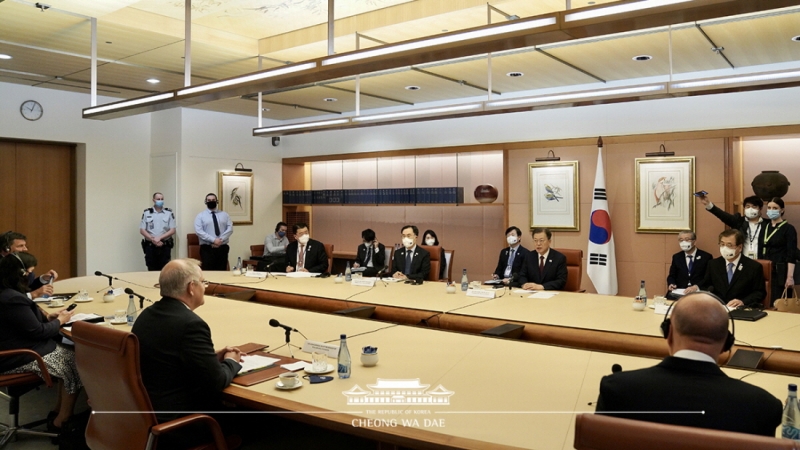 Thank you, Prime Minister Morrison and members of the Australian delegation. I am deeply grateful to all of you for extending your first invitation since the outbreak of COVID-19 to us and for warmly greeting me and my delegation out of your extraordinary friendship with Korea.

Through the one-on-one summit with Prime Minister Morrison, we reaffirmed that our two countries share the same position and commitment in regard to international affairs and peace on the Korean Peninsula.

Australia was the second country, following the United States, to commit to participating in the Korean War. To Australian Korean War veterans and the Korean people, the Battle of Gapyeong – fought seven decades ago – is a name synonymous with sacrifice and glory.

On the U.N. Forces Participation Day this year, I awarded Australian General Colin Nicholas Khan the Order of Civil Merit with utmost respect on behalf of the Korean people. The Korean people will never forget the noble sacrifices of Australian Korean War veterans who fought alongside us and shed blood to safeguard liberty and peace.

Today, we agreed to upgrade our bilateral relations to a comprehensive strategic partnership on the foundation of the invaluable ties between our two countries. I believe this will be a gift of great joy for the peoples of the two countries in this year marking the 60th anniversary of diplomatic relations. Based on the special friendship between our two countries, Australia and Korea are making preparations for a new era by expanding cooperation in a variety of areas.

Australia and Korea have worked closely together in economic fields by building upon complementary industrial structures. Even amid the COVID-19 pandemic, cooperation between our two countries has become more vibrant, and bilateral trade is expected to hit an all-time high this year. I look forward to further expanding our cooperation to include supply chain stability and the development and commercialization of low-carbon technology, as well as space and cyber technologies and other future-oriented high-tech fields.

I extend my gratitude to the Prime Minster for his consistent support for Korea’s efforts to achieve denuclearization and permanent peace on the Korean Peninsula. I hope that our two countries will jointly spearhead international efforts to resolve common challenges humanity is facing as well.

Today, with the friendship that has grown since diplomatic ties were established 60 years ago, we will resolutely strengthen our commitment to another 60 years of cooperation.