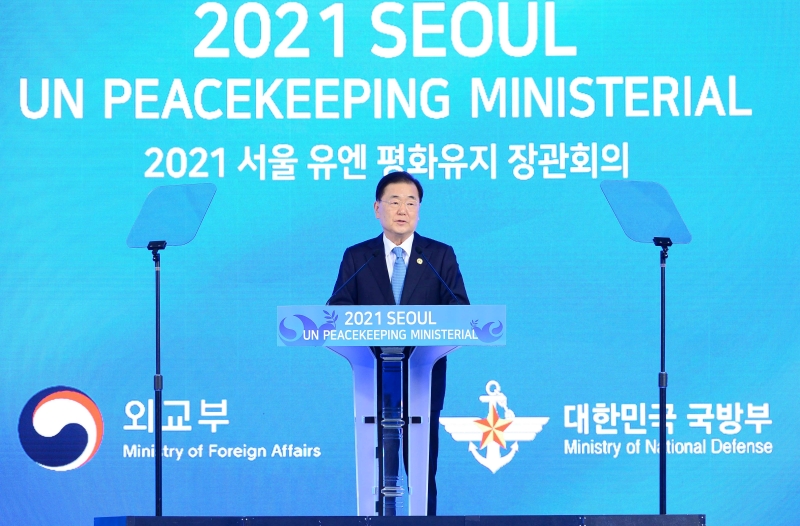 - Highest-Level Conference on UN Peacekeeping, hosted by Korea, for the first time in Asia -

1. The 2021 Seoul UN Peacekeeping Ministerial, co-hosted by the Ministry of Foreign Affairs and the Ministry of National Defense of the Republic of Korea, will take place virtually on Tuesday, Dec. 7 (opening ceremony, session 1 and session 2), and Wednesday, Dec. 8 (session 3, session 4, and closing ceremony).

◦ The format of this event has changed from a full-scale, in-person meeting to a virtual one, considering the ongoing global spread of the new Omicron variant and the potential impact it may have on the health and safety of the Korean people.

- Links to the YouTube channels in Korean and six other UN official languages (English, French, Spanish, Russian, Arabic and Chinese) will be provided on the Ministerial website (www. unpko2021.kr).

2. The Ministerial is held in Asia for the first time, and the invitations were issued to foreign and national defense ministers of the 155 Members of the Special Committee on UN Peacekeeping Operations (C34). Ministerial- or vice ministerial-level officials from 76 C34 countries will virtually participate to show their commitment to improving UN peacekeeping operations.

※ As of 12:00, Monday, Dec. 6, 15 foreign ministers, 29 defense ministers,  1 veterans minister and 20 vice ministers have registered to speak at the Ministerial.

3. The opening ceremony will kick off with a video showing, introducing UN peacekeeping operations, the background behind holding the Ministerial, and challenges and efforts to overcome them. UN Secretary-General Antonio Guterres’congratulatory video message will follow, and opening remarks by Minister of Foreign Affairs CHUNG Eui-yong and Minister of National Defense SUH Wook will be delivered.

◦ Especially, three Under Secretaries-General* visiting Korea for the Ministerial, officials from the co-chairing countries of the Seoul Ministerial, and Korean peacekeepers with experience in field missions will attend the opening ceremony.

4. Foreign Minister Chung, as Chair, will preside over the first session on “Sustaining Peace.” A keynote address will be delivered by the foreign minister of Bangladesh, and ministerial- or vice ministerial-level officials from 20 countries, including the UK, China, Canada, India, Ireland and Italy, will virtually participate to present their pledges.

6. The third session on “Performance and Accountability,” to be held on Wednesday, Dec. 8, the second day of the Ministerial, will be chaired by Under Secretary-General for Management Strategy, Policy and Compliance, Ms. Catherine Pollard. Eighth UN Secretary-General Ban Ki-moon will give a special address, and a keynote speech by the defense minister of Rwanda will follow.

7. The fourth session, titled “Protection of Civilians and Safety & Security,” will be chaired by Under Secretary-General for Peace Operations, Mr. Jean-Pierre Lacroix, during which keynote addresses will be given by the U.S. Ambassador to the UN and the foreign minister of the Netherlands.

8. Korea, by successfully hosting the Ministerial, will rally political support from the international community for improvements in peacekeeping operations, and at the same time, enhance its standing as a leading country in global discussions on international peace and security.