3rd International Conference on “Action with Women and Peace” 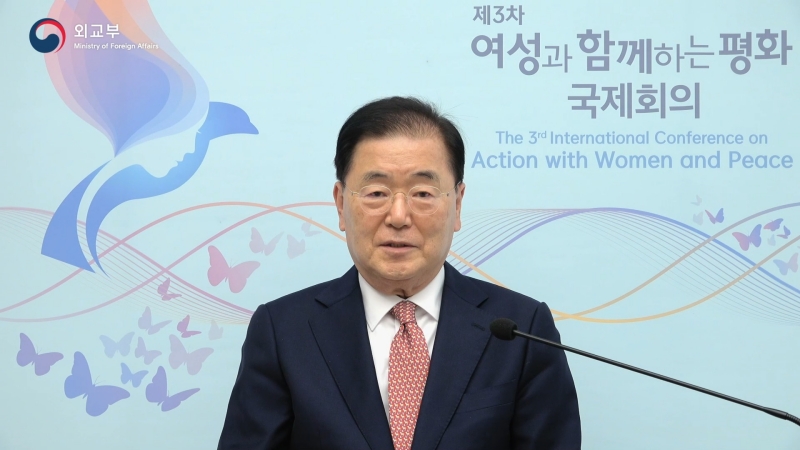 3rd International Conference on “Action with Women and Peace”

1. The Ministry of Foreign Affairs hosted the 3rd International Conference on Action with Women and Peace on November 25 in a hybrid format under the theme of “Strengthening Women’s Roles and Leadership in Building and Sustaining Peace, with the Survivor-centered Approach.”

° The Ministry has held the annual international conference since 2019, in accordance with its “Action with Women and Peace Initiative,” launched in 2018 to contribute to the global efforts to eliminate conflict-related sexual violence around the globe.

2. More than 20 participants from various governments, international organizations and civil societies participated in the conference, including Minister of Foreign Affairs Chung Eui-yong, UN High Commissioner for Human Rights Michelle Bachelet, Minister of State Lord Ahmad of Wimbledon of the UK, Ambassador for Women, Peace and Security Jacqueline O’Neill of Canada, Executive Director of the ASEAN Institute for Peace and Reconciliation I Gusti Agung Wesaka Puja, United Nations Human Rights Council (UNHRC) Special Rapporteur on violence against women Reem Alsalem and UNHRC Special Rapporteur on the promotion of truth, justice, reparation and guarantees of non-recurrence Fabian Salvioli. They discussed the situation of conflict-related sexual violence in Asia and urgent need for women’s role and leadership in the entire process of peace-building.

3. In his opening remarks, Foreign Minister Chung underscored the survivor-centered approach in responding to conflict-related sexual violence and expressed the Korean government’s commitment to continue to make meaningful contributions to developing the women, peace and security agenda.

° Foreign Minister Chung highlighted that the conference is a part of Korea’s efforts to repay the international support from the past by contributing to the advancement of global issues as a country that has grown to become the 10th largest economy in the world and one of the most democratic countries in the Asia Pacific region.

° He expressed his concern over the situation of human rights of women and girls in Asian countries including Myanmar and Afghanistan.

° In particular, he explained that Korea safely brought Afghan “persons of merit” to Korea, which was the first time that Korea received such a large number of foreigners who were at risk due to conflict and humanitarian crisis.

° He also emphasized that the survivor-centered approach, as a solution to conflict-related sexual violence, is the only way to heal the wounds of the survivors and restore their honor and dignity.

° He emphasized the importance of ensuring the women’s participation in the whole process of peacebuilding and reconciliation, in order to achieve sustainable peace, recognizing that women make up the vast majority of conflict-related sexual violence victims.

4. UN High Commissioner for Human Rights Michelle Bachelet stated that peace negotiation and decision making processes still lack women’s participation and reiterated that the decision in which women’s perspectives and needs are not reflected is not sustainable.

° In particular, she underlined the significance of the joint efforts to address women’s rights in Afghanistan and Myanmar and expected that the conference will serve as an important momentum to make contributions to these endeavors.

5. Voices of the future generation on conflict-related sexual violence were shared through the screening of award-winning video clips of the Global Youth Video Competition.

7. The Ministry of Foreign Affairs will invigorate discussions of the global community on the issues of conflict-related sexual violence, and further strengthen its contributions towards the women, peace and security agenda through the “Action with Women and Peace Initiative.”