Outcome of Republic of Korea-Japan Foreign Ministers’ Meeting (May 5) 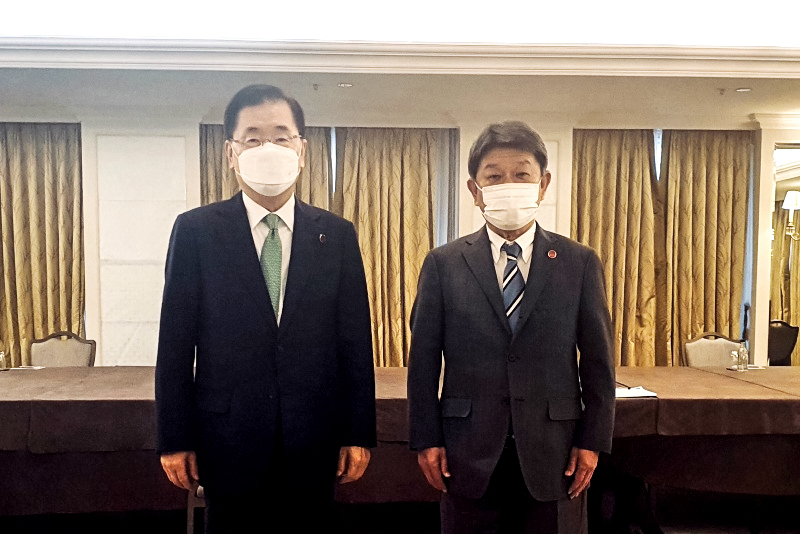 1. On the occasion of the Group of Seven Foreign and Development Ministers’ Meeting held in London, Minister of Foreign Affairs of the Republic of Korea Chung Eui-yong had a meeting with Minister for Foreign Affairs of Japan Toshimitsu Motegi* in the morning of May 5, local time, and exchanged views on matters of mutual interest.

2. The two ministers shared the view that the Republic of Korea and Japan should closely cooperate for the peace and prosperity of Northeast Asia and beyond and agreed to develop future-oriented relations between the two countries.

3. Regarding the Government of Japan’s decision to discharge contaminated water from the Fukushima Daiichi Nuclear Power Station into the ocean, Minister Chung clearly conveyed his opposition and expressed deep concerns over the fact that the decision was made without sufficient prior consultations with neighboring countries.

o Minister Chung emphasized that this issue warrants a very cautious approach as it could pose a potential threat to the health and safety of Korean people and marine environment.

4. With regard to the issues related to Japan’s past colonial ruling of Korea, in particular the issues of the court rulings on the civil actions filed by “comfort women” victims and the Supreme Court’s ruling on victims of forced labor, Minister Motegi explained the Government of Japan’s position.

o In return, Minister Chung stressed that the historical issues cannot be resolved without Japan’s correct recognition of history and explained the Government of the Republic of Korea’s position.

5. Meanwhile, both sides appreciated close communications on North Korea issues between the ROK and Japan and among the ROK, Japan and the United States. They committed to continuing cooperation to make substantive progress in achieving complete denuclearization of and establishing permanent peace on the Korean Peninsula.

6. The ministers agreed to continue close communications and dialogues between the two countries to resolve pending issues.