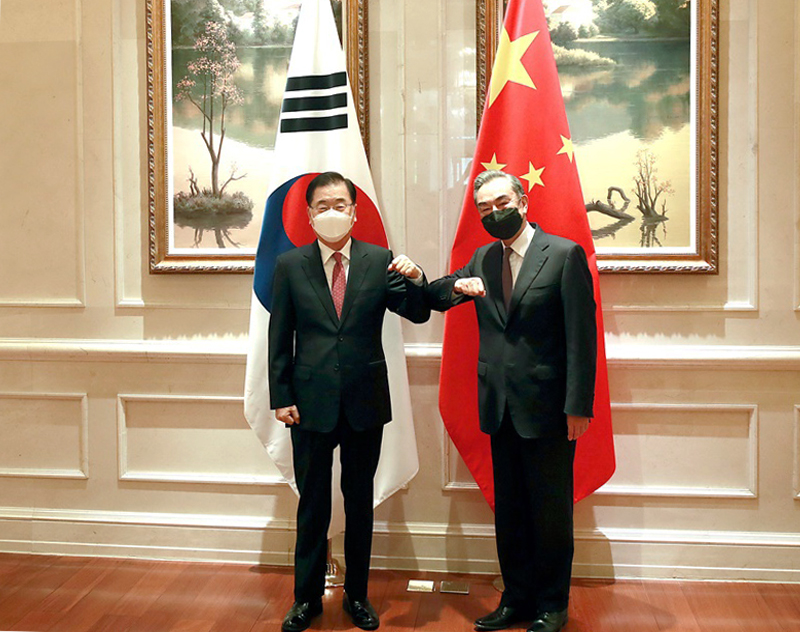 1. Minister of Foreign Affairs Chung Eui-yong had a meeting and luncheon with State Councilor and Minister of Foreign Affairs of China Wang Yi in Xiamen, Fujian province of China, on April 3, and exchanged views on matters concerning Korea-China bilateral relations including summit and high-level exchanges and substantive cooperation; Korean Peninsula issues including the denuclearization of the Korean Peninsula; and various issues of mutual interest including regional and global affairs.

2. Recognizing that even amid the COVID-19 pandemic, the two countries have continued summit and high-level exchanges using face-to-face as well as non-face-to-face methods, the two Foreign Ministers agreed to strengthen exchanges and cooperation through various dialogue mechanisms between Korea and China.

o The Chinese side reiterated Chinese President Xi Jinping’s will to visit Korea, and the two sides agreed to continue active communication in order to carry out President Xi’s visit to Korea when the COVID-19 situations are stabilized and conditions are created. In addition, the two sides reaffirmed the need for continued cooperation for a trilateral summit among Korea, China and Japan to be held as early as possible.

o The two sides agreed to promote bilateral parliamentary exchanges while holding a vice foreign ministerial strategic dialogue and a foreign policy and security dialogue (2+2) within the first half of this year. In addition, in order to promote dialogue between the two Ministries at various levels, the two sides agreed to draw up a plan for exchanges and cooperation between the Ministries of Foreign Affairs of Korea and China.

3. The two Foreign Ministers, in preparation for the 30th anniversary of the establishment of Korea-China diplomatic relations next year, decided to enrich the Korea-China strategic cooperative partnership and strengthen the foundation for future development.

o Noting with appreciation the declaration of the Year of Korea-China Cultural Exchanges (2021-2022) during the telephone conversation between the Presidents of the two countries in January, the two sides agreed to promote mutual understanding of cultural diversity between the two peoples through various cultural exchanges, and, in order to carry this out, agreed to hold a meeting of the Korea-China committee for the promotion of people-to-people and cultural exchanges as early as possible.

o The two sides shared the view that continuous promotion and management of friendly sentiments between the two peoples is very important for the long-term and stable development of bilateral relations, and agreed to work closely together on this matter.

4. The two Foreign Ministers noted that the two sides have been cooperating closely to promote people-to-people exchanges by expanding the fast track procedure under the COVID-19 situation, and agreed to make various related efforts down the road.

o Foreign Minister Chung noted with appreciation China’s support for the “Northeast Asia Cooperation for Health Security” initiative and hoped for its continued support and cooperation, and Foreign Minister Wang said he actively supports the implementation of the initiative. In addition, the two sides agreed on the need for continuous development of the initiative and agreed to make efforts together to expand the participating countries from the region.

5. The two Foreign Ministers agreed that strengthening substantive cooperation in areas like culture, economy, environment and history is crucial in advancing the bilateral relations, and agreed to pursue a range of forms of cooperation in such areas.

o Foreign Minister Chung asked for more active cooperation from the Chinese side in reinforcing cooperation in the field of cultural contents such as games, movies, and broadcasting, and Foreign Minister Wang mentioned that he was well aware of Korea’s interests and hoped that the two sides would continue to communicate.

o The two Foreign Ministers agreed to adopt the “Korea-China Joint Plan for Economic Cooperation” as early as possible; work for an early entry into force of the RCEP; and accelerate the second phase of the Korea-China FTA negotiations. Also, the two Foreign Ministers agreed to continue to seek cooperation between the New Southern and Northern Policies of Korea and the Belt and Road Initiative of China, as agreed between the two leaders.

o In addition, the two Foreign Ministers agreed to continue cooperation between the two countries on historical issues including preservation and management of the historic sites of the Korean independence movement in China and joint research on mass graves in Hainan.