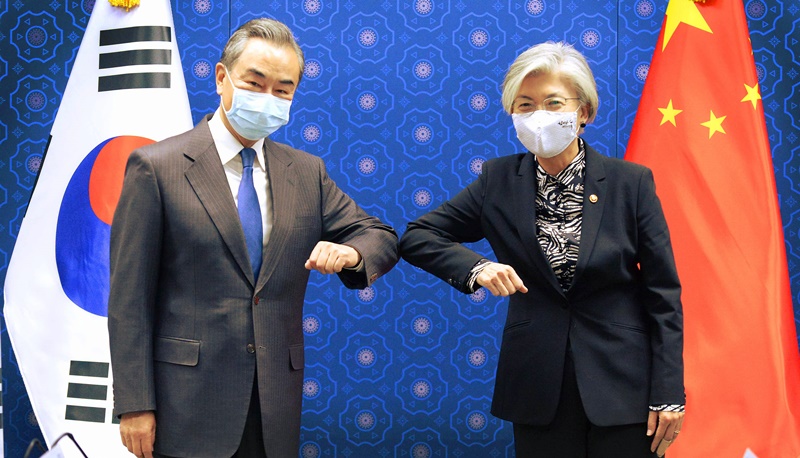 1. Minister of Foreign Affairs Kang, Kyung-wha had a meeting and luncheon with Mr. Wang Yi, State Councilor and Minister of Foreign Affairs of the People’s Republic of China, on November 26, and exchanged views on matters concerning the Republic of Korea (ROK)-China relations, including cooperation on COVID-19 response, summit-and high-level exchanges, fostering friendly sentiments, and substantive cooperation; Korean Peninsula issues including the denuclearization; and various issues of mutual interest, including regional and global affairs.

2. The two Ministers noted with appreciation that even amid the difficulties due to the COVID-19 pandemic this year, the two countries have continued communication in various ways including the phone conversations between the leaders and the foreign ministers; created an example of efficient cooperation in disease prevention and control including the establishment of the fast track procedure; and continued smooth economic cooperation between the two countries despite the global economic downturn.

3. The two Ministers agreed that amid the prolonged COVID-19 pandemic, the two countries need to continue to expand people-to-people exchanges through expanding the fast track procedure and increasing flights, while maintaining measures for disease prevention and control.

o Minister Kang suggested that the two countries cooperate more actively to ensure more convenient entries for people traveling to each other’s countries, while maintaining each country’s measures for disease prevention and control. State Councilor Wang suggested working closely together to continue various efforts to facilitate people-to-people exchanges between the two countries even amid the COVID-19 pandemic.

4. The two Ministers agreed on the significance of exchanges between the leaders and high-level officials of the two countries for the development of the ROK-China relations, and agreed to further promote them.

o The Chinese side reaffirmed Chinese President Xi Jinping’s will to visit the ROK, and the two sides agreed to continue to communicate actively so that President Xi’s visit to the ROK can be arranged as soon as the COVID-19 situation stabilizes and the conditions are ready.

o In addition, the two sides reaffirmed that trilateral cooperation among the ROK, China, and Japan is all the more crucial amid COVID-19 and the fluid regional and global situations, and agreed to continue to work together to hold a trilateral summit as early as possible.

5. The two Ministers shared the view that efforts for continued promotion of mutual understanding and friendly sentiments between the people of the two countries are also important for a long-term, stable development of the bilateral relations, and agreed to continue close communication to that end.

6. The two Ministers agreed that expanding exchanges and cooperation in cultural, economic, environmental and historical affairs is crucial in advancing the bilateral relations, and agreed to pursue a range of cooperation projects in various areas.

o The two Ministers agreed to make preparations for the Year of the ROK-China Cultural Exchanges (2021-2022) based on the agreement between the leaders and accelerate the efforts to adopt the “ROK-China Joint Plan for Economic Cooperation (2021-2025)” which will set out a blueprint for economic cooperation for the next five years.

o Minister Kang asked for more active cooperation from the Chinese side in reinforcing cooperation in culture contents, and State Councilor Wang said he hopes the two sides continue to communicate.

o Furthermore, the two Ministers agreed in principle to launch a committee for the future-oriented development of the ROK-China relations with the aim of drawing up a roadmap presenting the way forward for the bilateral relations on the occasion of the 30th anniversary of the establishment of diplomatic relations in 2022, and agreed to have concrete discussions for launching the committee.

o The two Ministers agreed to carry out joint investigation for preserving and commemorating the mass graves in Hainan and continue communication and cooperation on the issue.

o The two Ministers also agreed to strengthen cooperation on environmental issues including fine dust, and continue necessary communication on the P4G Summit to be held next year.

8. The two Ministers shared their respective assessments and positions on various regional and global affairs, and exchanged views on ways to contribute to the international community’s efforts including COVID-19 response, economic recovery, and the maintenance of regional peace and stability. They agreed to continue to communicate and cooperate more closely on regional and global issues.

9. In the ROK-China Foreign Ministers’ meeting, which was the 11th one between the two Ministers and the first face-to-face meeting since the outbreak of the COVID-19 pandemic, the two Ministers had a broad and in-depth exchange of views on issues of mutual interest. The close communication between the Foreign Ministers of the two countries contributed to making substantive progress in the ROK-China strategic cooperative partnership and promoting the future-oriented development of the bilateral relations which has been agreed upon between the leaders of the two countries.