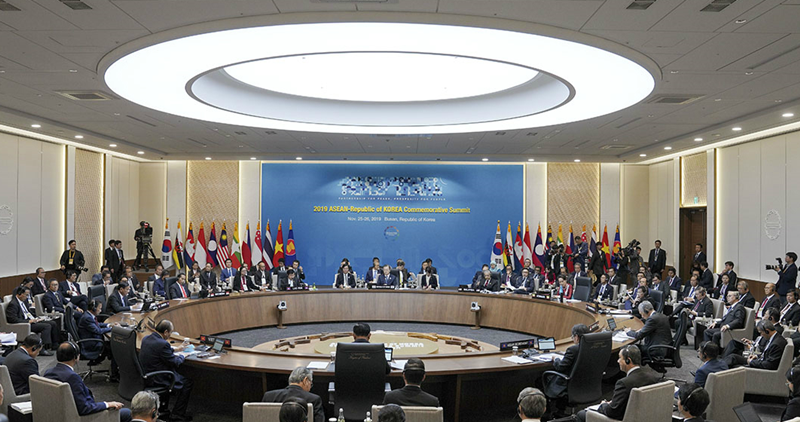 ASEAN heads of state and government,

I am pleased to meet you all here in Busan, the maritime capital of the Republic of Korea. Korea has four distinct seasons. We are now into winter. I hope you will enjoy the season, although it is different from that of ASEAN.

First of all, I would like to congratulate Thai Prime Minister Prayut on the successful hosting of the ASEAN Plus Three Summit. I am also grateful to His Majesty Sultan Hassanal Bolkiah of Brunei Darussalam, who has played a great role as Country Coordinator for ASEAN-ROK Dialogue.

The establishment of ASEAN-Korea dialogue relations in 1989 was made possible due to the insights of the leaders at that time. ASEAN and the Republic of Korea have been forging a relationship of mutual prosperity while preparing for the Asia-Pacific era.

I have very high regard for the fact that our cooperation has expanded beyond the economy and trade into all fronts, including politics, security, society and culture. I believe what enabled us to overcome the East Asian foreign exchange crisis and the global financial crisis was the strength of the ties and trust we have built together.

ASEAN is an invaluable partner for Korea. Shortly after its inauguration, my Administration sent a special envoy there and announced the New Southern Policy with a goal to create a “people-centered community of peace and prosperity” in cooperation with ASEAN.

For the first time as a sitting president of the Republic of Korea, I visited all 10 ASEAN member states in just over two years. The Presidential Committee on New Southern Policy was launched, and the ASEAN-ROK Cooperation Fund was doubled this year. We also established the ASEAN Culture House here in Busan to strengthen cultural cooperation with ASEAN.

Now, 30 years after the establishment of relations between ASEAN and Korea, trade, investment and people-to-people exchanges have significantly increased: 20 times, 70 times and 40 times, respectively.

We have now become indispensable friends to each other, and together, we dream new dreams and turn each into reality one by one.

An inclusive and sustainable world depends on Asian cooperation. Our goals will give hope to all of humanity beyond Asia. Today, I’d like to see a new door leading to forward-looking cooperation open wider based on the achievements made in Korea-ASEAN relations to date.

Cooperation and solidarity must be further strengthened. Over the coming 30 years, we must build a more solid relationship in order to become a mutually beneficial community that realizes “Partnership for Peace, Prosperity for People.”

The 21st century is the era of Asia. The “Asian spirit” that embraces all, excluding neither nature nor any person or nation, is the wisdom that Asia imparts to the entire world. If Korea and ASEAN member states, which share the “Asian spirit,” come together as one, no matter what challenges may arise, we can turn them into successes.

Busan is a gateway where a continent meets an ocean. May ASEAN and Korea be reborn here in Busan as a single community.

Next, I would like to ask Prime Minister Prayut of Thailand, the Chair of ASEAN this year, and the Co-chair of the ASEAN-Republic of Korea Commemorative Summit to give his opening remarks.