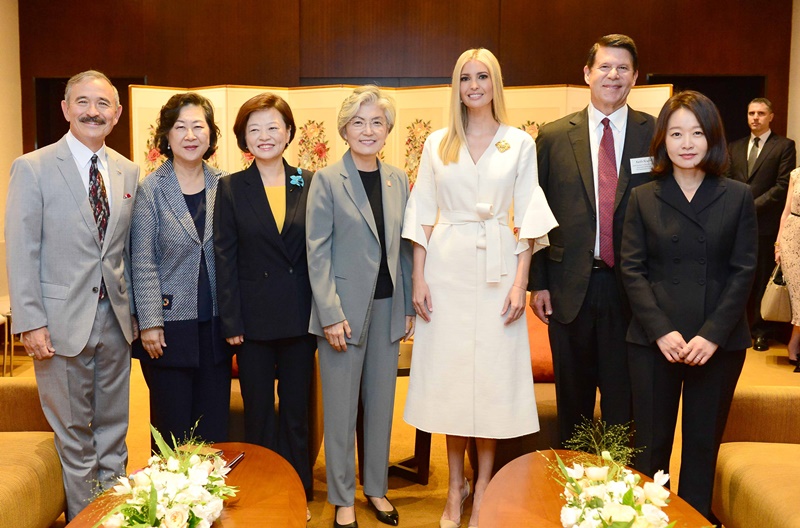 1. Minister of Foreign Affairs Kang Kyung-wha, together with Advisor to the President of the United States Ivanka Trump, who is on a visit to the Republic of Korea, held an “ROK-US Women’s Empowerment Forum” at Hyatt Hotel, Seoul, on the morning of June 30 and discussed ways for women’s empowerment across the world, including developing countries.

° The Forum started with welcoming remarks by Minister of Gender Equality and Family Jin Sun Mee, followed by a panel discussion among Minister Kang, Advisor Ivanka Trump, and President of NCSOFT Corporation Yoon Song-yee, with Professor of the Graduate School of International Studies at Ewha Womans University Kim Eun Mee as the moderator. The event brought together around 60 people, including members of major women’s institutions and women entrepreneurs from the ROK and the U.S., as well as officials of the Ministry of Foreign Affairs, the Ministry of Gender Equality and Family, and the Korea International Cooperation Agency.

2. In her welcoming remarks, Minister of Gender Equality and Family Jin Sun Mee introduced the ROK’s policy to enhance women’s representation in the public and private sectors as well as its progress. She also spoke about the ROK government’s goal and policy direction for increasing women’s economic opportunities and building their capabilities.

3. At the Forum, Minister Kang underscored women’s role and the power of education as keys to the ROK’s economic development; and noted with appreciation that the scope and depth of the ROK-US cooperation is expanding beyond security and economy to the realm of women’s empowerment.

° The Minister added that for women’s empowerment in developing countries, the ROK government is actively pursuing development cooperation, including not only in the areas of healthcare and education but also for economic empowerment.

° Minister Kang stressed that the concepts of women, peace and development are not separate from each other but interconnected. She added that, in that light, the ROK government, which is doing its utmost to establish a peace regime on the Korean Peninsula that is also related to international peace and security, is paying attention to women’s contributions and roles.

4. Advisor to the President of the U.S. Ivanka Trump explained the efforts by the U.S. government and Congress for women’s empowerment as well as the Women's Global Development and Prosperity (W-GDP) Initiative, which was launched under her leadership in February 2019. She went on to commend the ROK government for joining the efforts to improve women’s access to finance in developing countries by being a donor country to the Women Entrepreneurs Finance Initiative (We-Fi).

° Advisor Ivanka Trump mentioned that women are playing a pivotal role in promoting peace; in particular, presented her view that women in North Korea can contribute greatly to the economic development of North Korea and to the establishment of peace on the Korean Peninsula; and voiced hope that the ROK and the U.S. will work together as partners.

5. President of NCSOFT Corporation Yoon Song-yee explained the in-house child care assistance system and stressed that ensuring diversity through gender equality and women’s empowerment is not only an issue of universal human rights but also a necessity for enhancing competitiveness of countries, societies and individual enterprises.

6. The Forum, hosted by the Ministry of Foreign Affairs with the support of the Ministry of Gender Equality and Family, is seen to have served as an opportunity for figures from the public and private sectors of the ROK and the U.S. to get together to start discussions on the progress in the efforts to expand women’s economic opportunities and build their capabilities not only in the ROK and the U.S. but also across the world, as well as challenges and tasks for the future. The event is also seen to have provided an opportunity to reaffirm the commitment of the ROK and the U.S. to play a leading role in cooperation on women’s empowerment.