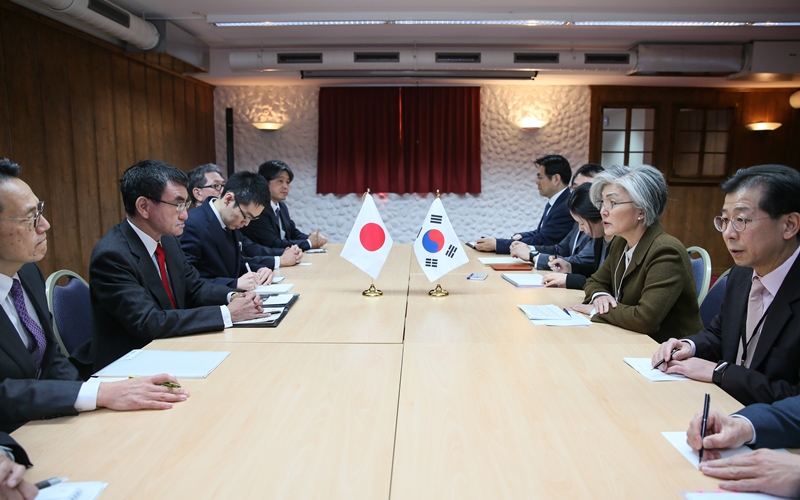 1. On the occasion of the Davos Forum 2019, Foreign Minister Kang Kyung-wha met bilaterally with Foreign Minister of Japan Taro Kono on January 23. In the meeting, the two top diplomats discussed ways to work together toward the denuclearization and the establishment of peace on the Korean Peninsula; the Republic of Korea Supreme Court ruling regarding victims of forced labor during the Japanese occupation of Korea; Japan’s claim that an ROK destroyer operated signal tracking and illuminating radar (STIR) against a Japanese patrol plane; and the way forward for the ROK-Japan relations.

2. Minister Kang, taking note of the recent high-level talks between the United States and the Democratic People’s Republic of Korea, expressed expectation regarding the proposed second US-DPRK summit. She went on to suggest that the ROK and Japan continue working together to achieve tangible progress toward a complete denuclearization and a lasting peace on the Korean Peninsula.

° Minister Kono, underscoring the importance of tangible progress toward denuclearization, voiced hope for continued close communication and coordination between the ROK and Japan on Korean Peninsula issues, apart from that on some of the bilateral issues.

3. Minister Kang articulated the ROK government’s position on the Supreme Court decision regarding victims of forced labor, suggesting that the Foreign Ministries of the ROK and Japan muster wisdom to prevent the issue from hampering efforts to advance the bilateral ties in a future-oriented way. In response, Minister Kono explained the Japanese government’s position.

4. With respect to the radar issue, Minister Kang voiced concern over steps taken by the Japanese government, adding that the national defense authorities of the two countries should seek to resolve the issue as soon as possible through consultations.

° The two Ministers drew a common understanding that apart from the radar issue, the ROK-Japan and ROK-US-Japan security cooperation, including on Korean Peninsula issues, should continue unswervingly.

5. The two Ministers reaffirmed the need for efforts to wisely address a number of thorny issues and thereby advance the bilateral relations in a future-oriented way; and agreed to maintain close communication and exchanges between the two countries in 2019.