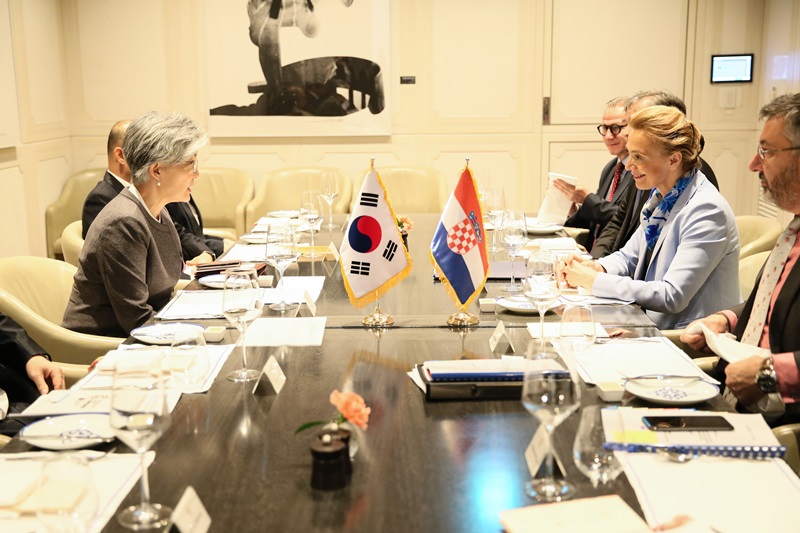 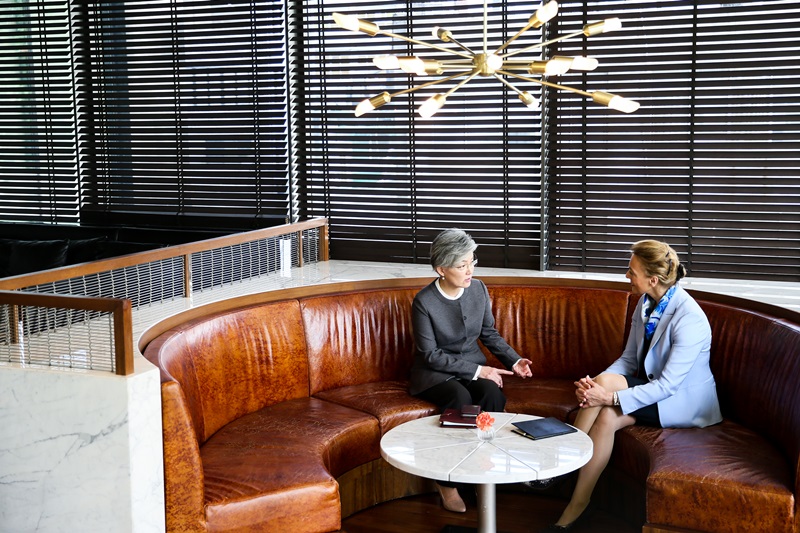 ※ Minister Burić visited India and then the ROK on her first Asia tour since her inauguration in June 2017.

2. The two Ministers, taking note of the progress in the friendly and cooperative relationship between the two countries since the establishment of diplomatic relations in 1992, shared the view that the year 2018, in particular, would be recorded as a monumental year in terms of the development of the bilateral relations, as an Embassy of the Republic of Croatia would open in the ROK and direct flights had been launched between the two countries earlier in the year.

※ The Croatian Embassy in the ROK will formally open at 17:00, October 24. (Vice Foreign Minister Lee Tae-ho will attend the opening ceremony.)

- The ROK Embassy in Croatia opened in December 2005.

※ Direct flights between Incheon and Zagreb were launched on September 1, 2018.

° Minister Kang commended Croatia’s achievement of democracy and economic development in a short period time after its independence in 1991 as well as its accession to the EU in 2013. She went on to note that the ROK and Croatia were lately seeing their relations leap to a higher level through robust people-to-people exchanges; and extended congratulations on the opening of the Croatian Embassy in the ROK, which was slated to take place later in the day.

3. The two Ministers agreed to accelerate efforts to boost bilateral trade and investment, and to work closely together to seek out concrete cooperation projects in such promising fields as science, technology, health and medical care, and the intelligent transportation system (ITS).

° Minister Pejčinović Burić brought attention to the fact that Croatia, lying at a favorable geopolitical location at the intersection of Central-Western Europe and Southeast Europe, offered a good investment environment to enterprises operating in Europe. She went on to express hope that many Korean companies would invest in Croatia and thereby help to bolster economic cooperation between the two countries.

4. Minister Kang shared with her Croatian counterpart the outcome of the third inter-Korean summit held in Pyeongyang in September and other recent developments in the situation on the Korean Peninsula; and asked for the Croatian government’s support for the efforts of the ROK government to achieve a complete denuclearization and establish a lasting peace on the Korean Peninsula.

° Minister Pejčinović Burić, commending the ROK government’s leading efforts to create the atmosphere of peace and stability on the Korean Peninsula, mentioned that Croatia would strongly support such efforts by the ROK government. The Minister went on to speak of the situation in Central-Eastern Europe, including the Balkan region, as well as the Croatian government’s position in this regard.

5. The first ROK-Croatia foreign ministerial meeting came as significant milestones in the bilateral relations were about to be created and were already created by the envisioned opening of the Croatian Embassy in the ROK and the launch of direct flights between the two countries. As such, the meeting is seen to have served as a good opportunity to discuss bilateral issues, to step up communication on situations on the Korean Peninsula and in other parts of the international community, and to promote friendship and trust between the two Foreign Ministers.