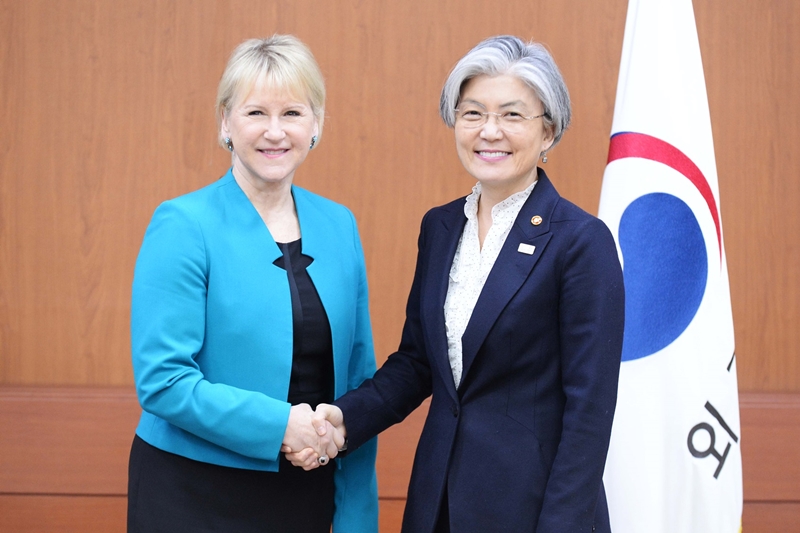 1. On February 19, Foreign Minister Kang Kyung-wha met with Foreign Minister Margot Wallstrom of Sweden, who was on a visit to the Republic of Korea for the PyeongChang Winter Olympics. In the meeting, the two top diplomats exchanged views on bilateral relations, ways to work together on the international stage, and the situation on the Korean Peninsula.

° Minister Kang expressed appreciation for the visits to the ROK by King Carl XVI Gustaf and Minister Wallstrom of Sweden during the PyeongChang Winter Olympics to grace the occasion with their presence, as well as hope that the athletes from Sweden, a winter sports powerhouse, will reap good results at the sporting event.

° Minister Wallstrom offered congratulations to the ROK on the Korean female curling team’s victory over its Swedish rival in the preliminary round earlier in the day; noted that the PyeongChang 2018 Olympic and Paralympic Winter Games will contribute to not only peace in Northeast Asia but also the efforts to deepen the ROK-Sweden relations; and expressed hope that the athletes from the ROK, the host of the sporting event, will see good results as well.

※ King Carl XVI Gustaf of Sweden is on a visit to the ROK from February 17 till 26 for the PyeongChang Winter Olympics. Likewise, Crown Princess Victoria will visit the country during the Paralympics.

2. With the year 2019 marking the 60th anniversary of the bilateral diplomatic relations, the two Ministers agreed to work closely together to boost high-level exchanges and in other ways in a bid to strengthen the friendship between the two countries. They also agreed to seek increased substantive bilateral cooperation in trade and investment, among others.

3. The two Ministers agreed to make diplomatic efforts in order for the momentum of inter-Korean talks built over the PyeongChang Olympics to continue and lead to dialogue on ways to achieve a peaceful resolution of the North Korean nuclear issue.

° Minister Kang asked Sweden, a country in close relations with both the ROK and North Korea, to continue playing a role, in close coordination with the ROK government, toward the resolution of the North Korean nuclear issue and the establishment of a lasting peace on the Korean Peninsula.

° Minister Wallstrom, expressing strong support for the ROK government’s work to improve inter-Korean relations and build peace on the Korean Peninsula, suggested that the ROK and Sweden continue close communication and cooperation with each other toward a peaceful resolution of the North Korean nuclear issue.

4. The two Ministers exchanged views on ways to work more closely together at the UN and on other international stages; in particular, drew a common understanding on the importance of bilateral cooperation on gender equality, peace, human rights and various other global issues; and agreed to work closely together thereon.

5. The ROK-Sweden foreign ministerial meeting on February 19 is seen to have served as an opportunity to reaffirm the long-standing friendship between the two countries and to seek ways to work more closely with each other on global issues.