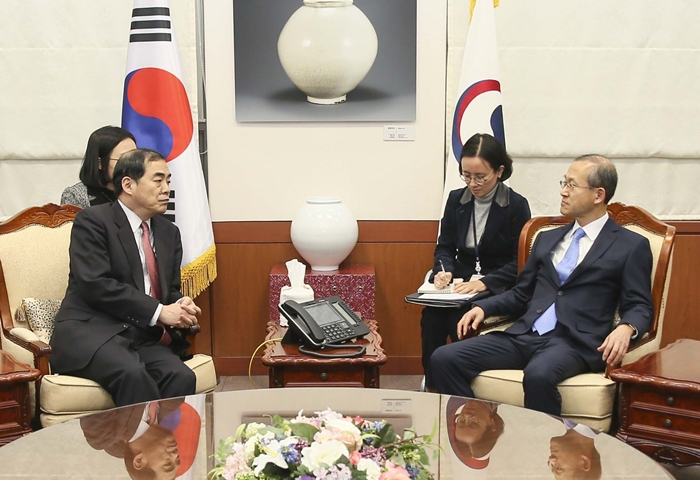 ※ Assistant Minister Kong (Special Representative on Korean Peninsula Affairs) is on a visit to the ROK on January 5-6 to attend a meeting of the ROK and Chinese top negotiators at the Six-Party Talks.

2. Vice Minister Lim and Assistant Minister Kong said that President Moon’s state visit to China was successful, and agreed to pursue close cooperation between the two countries, especially their Foreign Ministries, to move steadily forward with measures to follow up on the President’s visit to China so that exchanges and cooperation between the two countries, including people-to-people exchanges, can be brought back on track and increase further. The two sides especially reaffirmed the importance of cooperation to ensure the success of the PyeongChang Olympic Winter Games.

o Vice Minister Lim and Assistant Minister Kong exchanged views on the current situation on the Korean Peninsula and inter-Korean relations, and agreed to continue close cooperation between the two countries to solve the North Korean nuclear problem peacefully.

3. Regarding the deplorable incident where South Korean journalists were injured during President Moon’s visit to China, Vice Minister Lim stressed the importance of the Chinese side’s swift and thorough investigations, and related follow-up measures. Assistant Minister Kong said that the person involved was arrested and is being investigated, and the matter will be handled in accordance with related laws, and expressed regret over the fact that the deplorable incident occurred during the President’s state visit to China.